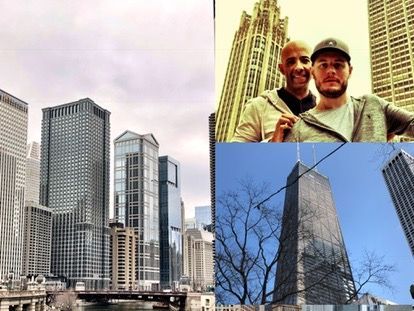 The windy city! It wasn’t that windy but it was bloody cold. Chicago is often seen as the epitome of a true American City and has a totally different vibe to its big brother, New York, which is more of a world city than anything else.

The trip started with a ride on the ‘L’, the cities metro system that rattles above the streets and in amongst the skyscrapers of this midwest city. Our first stop was the John Hancock Centre where we would get breathtaking views of downtown Chicago and the vast expanse of Lake Michigan. We always try to visit a skybox or observation deck whenever we visit a new city but this time we were going to be doing something a little different. Opened in 2017, the newest attraction at Chicago360 (the name of the observation deck) is ‘Tilt’. Tilt literally does what it says on the tin. You stand on a bay of panoramic windows and are literally tilted 30 degrees out over the city.

Despite being cabin crew, Ryan isn’t great with heights but he gave it a go and he left with sweaty palms and weak legs. He managed to keep his eyes open though and it’s a great to see the city from a different angle!

Next it was a bike ride by the canals and lake side. Like so many cities these days, Chicago has a network of bike hire points, affectionately known as Boris bikes in London. They are cheap to hire and you literally just find a bike station when you’ve finished with them.

We left ours by Millennium Park where you can take a look at Chicago’s newest sculpture. The Cloudgate, or bean if you are a local, is a big shiny…..well bean that reflects the city skyline.

A little further out of downtown is the Museum of Science & Industry. We have a very similar museum with exactly the same name here in our home town of Manchester and is a great interactive facility for both adults and kids alike. Learn about the perils of nuclear warfare, the science of wind and power of flights, its a fantastic way to escape the cold and experience a museum where you can really get involved.

We stayed at the Virgin hotel for our visit which was a different experience. True to form with anything that has the virgin brand, the only hotel in its portfolio to date, has a trendy vibe, helpful and approachable staff and funky decor. The ‘Commons Room’ is the hotels bar and has a happy hour every evening with a complimentary bar menu for all guests. Centrally located, it’s a great base to experience the windy city!